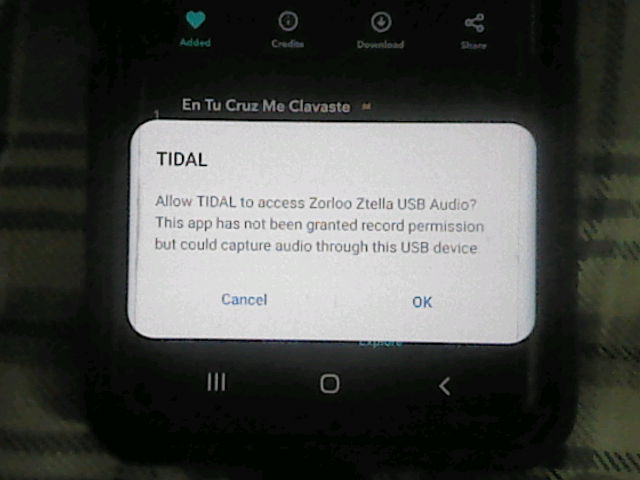 As a long-time user of Tidal, I’ve been enjoying the app for my music listening sessions, except that it did not support MQA (Tidal Masters) bitstreaming to USB DACs. This meant that the audio always got resampled to either 48Khz at first, and then to 192Khz in later versions. Up until several weeks ago, this was the case. We were forced to use third-party apps like USB Audio Player Pro or the Hiby Music app which added MQA support recently. Both of these apps require purchasing the MQA plug-in.

Now things changes as Tidal’s native Android app can detect some MQA-enabled USB DACs and prompts for permission to access it. This makes it able to bitstream MQA data to the DAC enabling it to perform the 2nd and 3rd unfolds.

If the DAC has an MQA indicator, it will also do so. In my test, Tidal successfully detected the Zorloo Ztella USB DAC and playing back MQA music made the LED switch to purple, which indicates it is rendering MQA.

While there’s controversy regarding MQA, I myself consider it a different audio codec. MQA music quality to my ears is good enough for me to enjoy listening to music, and having Tidal’s app bitstream it to the DAC is a nice step. I uninstalled USB Audio Player Pro because I don’t have a use for it., but I can recommend it if you prefer to use a third-party app. I’m just better used to Tidal’s app User Interface.

Lately, Sony has been adding MQA tracks for several albums. This is good for those who prefer this codec, while others will not like it due to the fact that it replaces the standard FLAC files. For me, I’m listening to the MQA versions as of now.

MQA stands for Master Quality Authenticated and was created by Bob Stuart, co-founder of Meridian Audio and actual founder of MQA Ltd.