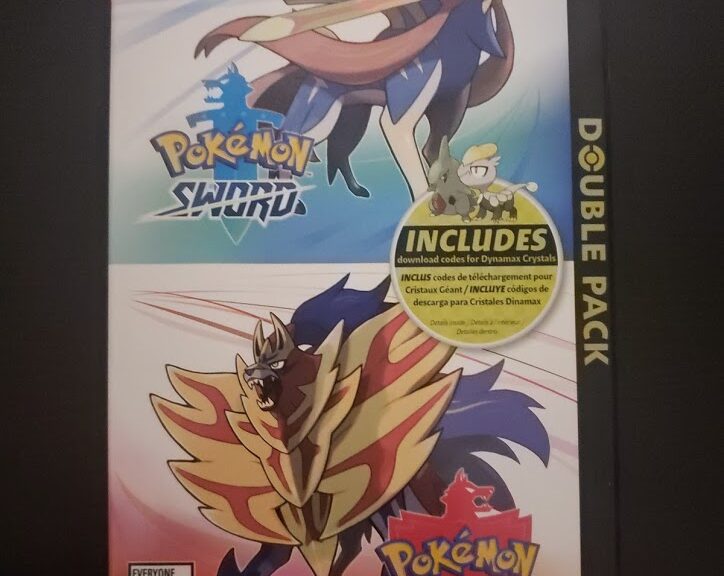 Here, I will be showing you pictures of the Pokémon Sword and Pokémon Shield Double Pack, which got released today:

As you can see in the above picture, that is the front of the box. Let’s take a look at the back:

And take out the contents:

We can see the Pokémon Sword and Pokémon Shield game box. We can also see it came with a download code to get some Dynamax Crystals.

Let’s start unboxing Pokémon Sword, taking a closer look at the front of the box:

We can see the game cart. Let’s take a closer look:

And that’s it for Pokémon Sword. Let’s start with Pokémon Shield.

This is the front of the box:

And let’s take a closer look at the game cart:

Finally, let’s take it out of the box:

And that’s it! We have now unboxed and taken out both game carts. Here is a final picture with both carts side by side:

You can buy the games on Amazon using the following links:

What Pokémon version did you get?

In this post, I will be sharing my unboxing video of the Cyrys, K.K. and Reese amiibos which are part of the Animal Crossing Triple-pack bundle. Today, I received my physical copy of the brand new Yoshi’s Crafted World game for the Nintendo Switch, which got released today, March 29, 2019.

Here, I’ll just show some photos of the box and the game cart. Let’s get started!

This is the box front:

When we open the box, there’s a helpful background showing what each button does, and of course, we have the game cart:

A closer look at the game cart:

And finally, the game cart out of the box:

I’ll play this game later, at some point, and share gameplay footage with all.

Today morning was very exciting! Since yesterday, when I heard of today’s Pokémon Direct, I said myself that we would get either a core Pokémon game for the Nintendo Switch or the next iteration of the new Pokémon Let’s Go series. Today, we got a whole new generation of Pokémon.

What I saw in the trailer is really good. The starter Pokémon looks really nice! It will be a difficult decision to choose one of them. Also, the Galar region looks nice but I have my questions. It may have been just me, but I feel like there’s not enough cities. Maybe we just got a teaser map and they are still working on arranging the cities and other routes.

What’s most interesting to me is the game names. Why is it called Pokémon Sword and Pokémon Shield? Will we see some medieval-themed rival in this game? Fighting with swords? We’ll just have to see.

We should be hearing more about these games during the year until it is released (Maybe at E3?). In the meantime, you can preorder the games on Amazon at the following links:

I have already preordered both games! Oh, and I hope they work with the Pokeball Plus that I love to use with Pokémon Let’s Go: Pikachu 😁.

What are your thoughts on these games? Let me know in the comments.

Today, I’d like to show you my Nintendo Switch connected to the Tunai Square Bluetooth DAC in USB Wired mode. This DAC came bundled with my Tunai Wand which I backed in Kickstarter.

The DAC is a USB Audio Class 1.0 device, meaning it is compatible with the Nintendo Switch in Wired mode. Just connect it and you’re ready to go! Just a word of caution: Lower the Switch volume! This DAC produces very loud sound, so lower the Switch volume. The DAC volume buttons doesn’t work, so you’ll have to use the Switch volume control. Other than that, it works awesome.

You can purchase the Tunai Square on Amazon at the following link:

Today, I’m showing one of the games I own. It’s Crash Bandicoot – N. Sane Trilogy for the Nintendo Switch. Interestingly, Amazon for some reason sent me the European version as you can see the PEGI logo. More interesting is that the game was sold from a U.S. warehouse by Amazon itself. I have no idea why this happened but hey, the Nintendo Switch is region free! Meaning I can play the game in my system.

So here’s the case of the game:

When we open the case, it doesn’t have any background and we can see the game cart:

A closer look to the game cart:

I also got the game guide. I like to read these and it can be of great help sometimes, especially when it comes to unlocking stuff in the game:

This is the game box:

And the sides and back (sorry for the blurry images):

Opening the box, we can find the Pro Controller box:

Once taken of the Smash Bros box, here’s the Pro Controller box:

Taking the controller out of the box, still wrapped:

Taking out the controller wrapping, we can see how beautiful it looks:

Here you can see the side where the L, R, ZL, ZR, Sync button and the USB-C connector is located:

The controller also comes with a USB-C cable. If connected to the switch, it will pair the controller to the console:

Now, let’s take a look at the Steel Case, where the game is located. It is also nicely wrapped:

Out of the wrap, here’s the front:

Inside, we can see one of the stages in the background and the game cart:

And here’s a closer look at the game cart:

Hope you enjoyed the photos!

In this post, I’ll be showing you the content of the Pokémon Let’s Go, Pikachu! Nintendo Switch game with the Pokeball Plus adapter. Let’s Start!

Here’s the game in the box I received from Amazon:

And here’s the game box outside of the Amazon box:

Let’s take a look at the sides:

Here’s the contents once we open the box:

Once we open it, we can see the Kanto map. It simply looks beautiful and amazing! We can also see the game cart.

A closer look at the game cart:

Now, let’s take a look at the Pokeball Plus accessory. It’s the only thing left in the

The front of the box:

When we open the box, we will first see a USB-A to USB-C cable to charge our Pokeball

Followed by the user manual:

Next we have the Pokeball adapter in a nice bubble wrap:

We see the analog stick which is also a button (A) when it’s pressed. The Button B is at the top:

We have a solid white color at the bottom:

At the back, we have a cover which covers the USB-C port that allows us to charge it:

Here, I have unwrapped the USB-C cable:

And now, some catching fun! The Pokémon catching mechanism actually works really nice. You select the “Get ready” option and then you throw the Pokeball gently. This is what makes the Pokeball so special. It adds a lot of value to the gameplay. Catching Pokémon with it, feeling the rumbles and hearing the Pokémon cries makes this a great catching experience.

Here, I’ve thrown the Pokeball to catch a wild Pokémon:

It has a nice LED that glows different colors. When we are catching a Pokémon, it glows yellow while the Pokéball rumbles:

When we catch the Pokémon, it glows green, followed by the Pokémon cry:

If we fail to catch a Pokémon, it will turn red. However, in this case I caught it so it turned green.

The game is really nice in my opinion. I like the graphics and the orchestrated music. Also, as I mentioned, the Pokéball Plus controller adds a sense of realism to the game. I’m still playing it and I’ll share with you my gameplay videos which I’m streaming on YouTube soon.