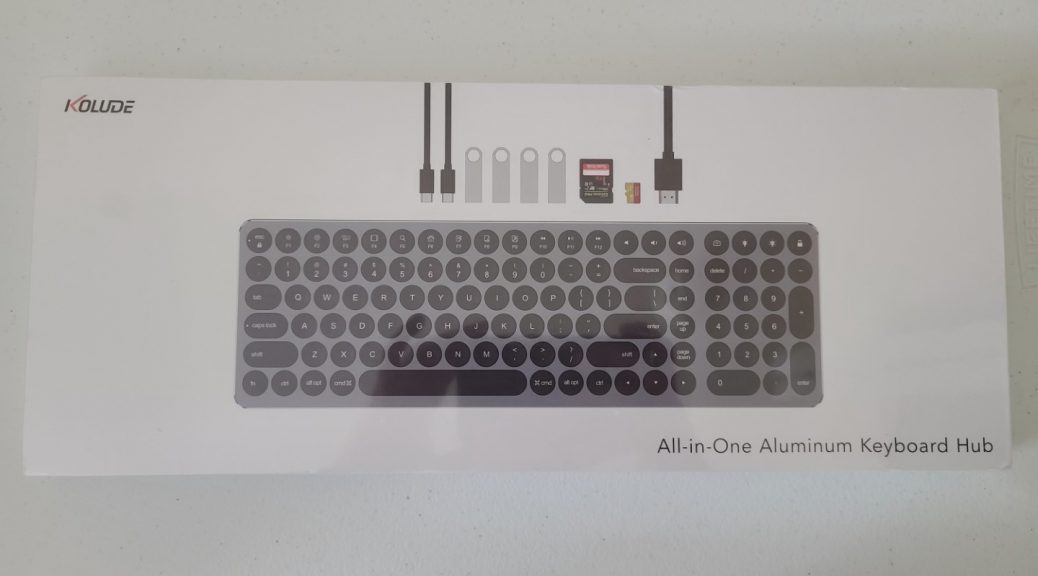 Today, I will be showing you the Kolude KD-k1 All-In-One keyboard.

It is a USB-C keyboard that also acts as a USB hub, having 4 USB 3 ports, SD and Micro SD Card reader, Power Delivery, and an HDMI port.

The keyboard contains the entire layout as well as the numeric pad keys, which is great for those who prefer to use them.

It is made of aluminum and the keys have a great typing feeling.

It also comes with a long USB-C cable that we can use to plug it on a Desktop PC. Is is really long.

The keyboard layout is strange. It seems to be designed primarily to be used on Macs, as we can see on the layout that before the space bar we have the Command key followed by the Alt key. On a Windows layout keyboard, you would have the Windows key first, then the Alt key, followed by the Space bar.

The amount of USB ports on the keyboard means we can easily plug our devices, like a USB mouse dongle, for example. Also, for photographers, it’s good to know it has the SD and Micro SD card readers right there.

Kolude released a firmware update for the keyboard that improves compatibility with Windows machines and switches the Alt and Command keys for Windows users. However, I thought the keyboard was reversing itself to the Mac mode. Turns out there are some keyboard shortcuts to alternate between the 2:

Because of this, I switched the Alt and Command keycaps to better fit my setup. It’s way easier to use now than it was before that firmware update. Also, the function keys now work as expected on Windows too. Just press the fn key followed by one of the function keys.

It’s been almost 9 months since I received it and I can say it is my very favorite keyboard. My previous one was a basic Wireless Logitech keyboard but this one really improves the typing experience, since I’m used to laptop-style keys. The hub feature is also very convenient as I can easily plug my devices. The supplied cable is connected to the back of my AMD desktop machine, which also has a USB-C port. Of course, it only works for data, so the HDMI port doesn’t work with it and I get the “Limited connectivity” message, which is expected.

This keyboard was launched on Kickstarter last year, in February 2020. I’d say this project was prompt in delivering the finished product and the compatibility firmware was also released in a timely manner. They now have the KD-k2 keyboard which is almost the same, with the difference of it not having the numeric pad. You can order one of these keyboards on their website.

Disclaimer: I haven’t purchased a product on their website. However, my kickstarted experience was very positive.