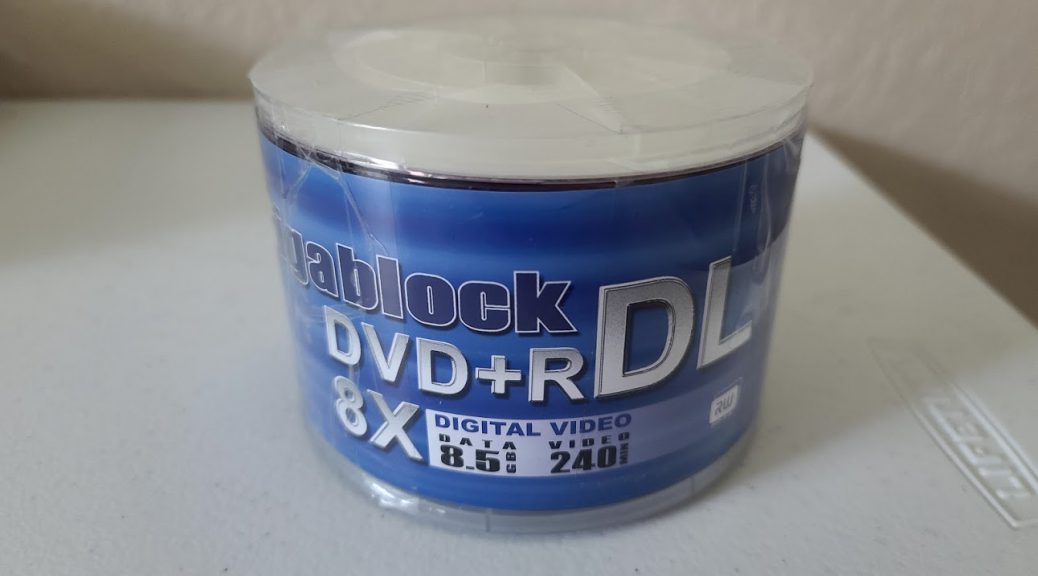 Note: I had this post written since the summer, but somehow forgot to publish it. I apologize for my lateness on publishing it.

Today, I’ll show you the 50-pack Gigablock DVD+R DL media I brought on Amazon. This 50-pack cost about half the price of a standard 100-pack DVD+R spindle. They are rated at 8x.

The discs do not come in a standard spindle, so you have to be very careful when opening it.

They have a branded surface:

The recording surface has a dark purple color:

When the disk is loaded in ImgBurn on a LiteOn iHAS524 drive with OverSpeed turned on, it will detect them as having a speed of up to 16x:

The disc media ID from this batch is RICOHJPN-D01-67.

Unfortunately, burning these discs with either 12x or 16x will not work and will produce coasters. They will actually write at 4x but will fail the verification. This is why I recommend turning off OverSpeed and burning at the rated 8x speed.

Here’s the disk information with OverSpeed turned off:

The LiteOn iHAS524 was able to burn the discs successfully when burned at 8x. I burned them with HyperTuning, Online HyperTuning and Smart-Burn turned on. OverSpeed was turned off.

Interestingly, it seemed to have burned some discs using a CAV strategy while the rest were burned using a Z-CLV strategy.

The disc started burning at 5x but eventually reached 8x. Then it went backward:

Data verification was successful going up to 16x:

The drive burned the discs starting at 4x, then going up to 6x, and finally up to 8x. It then did the same on the opposite direction:

Data verification was also successful having a maximum read speed of 16x:

I used Nero DiscSpeed to perform quality tests on these discs. It seems that there is a problem around the layer break when the scan is performed at the maximum speed which is 16x:

However, when we reduced the speed to 8x, we got some decent results with no issues at the layer break:

With a price of just $19.99, I think this is a good media to backup data. A 100pk Single-layer DVD+R spindle cost somewhere between $20-$25 these days. While these media are Double Layer, you’re getting half the discs with almost double the capacity for around that same price.

When burning these discs, just don’t overspeed them. You’ll have coasters. Burn them at their rated speed of 8x and always verify the data. While none of my discs had issues verifying the discs burned at 8x, those burned at 12x and 16x did experienced issues. This is why you should disable overspeed and burn at 8x.