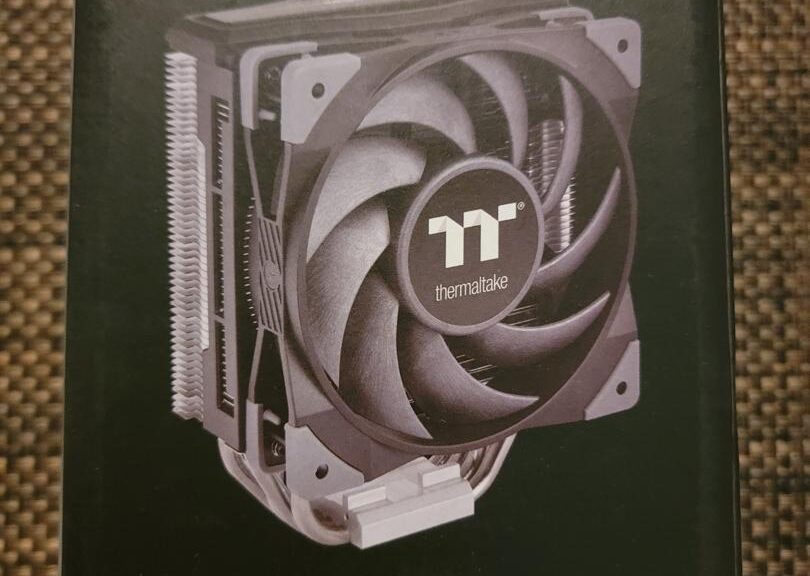 In case you may be wondering why I didn’t post something yesterday, it was due to a heatsink fan malfunction that caused my AMD Ryzen 3950x CPU to shutdown my PC. The fan started making some weird noises and wasn’t spinning correctly. This made the CPU temperature rise to the point of system throttling and eventually, shutting it down.

I took this chance to see some CPU coolers and settled with the Thermaltake TOUGHAIR 310, which Amazon had readily available for same day delivery. I got it almost at night yesterday, and mounted it today morning. I’ve spent the rest of the day checking its performance, updating my motherboard BIOS, and basically stressing the CPU to make sure it works properly. Now, it is time to see this cooler and its installation.

The box is a bit larger, given this comes with a 120mm fan for the heatsink of the same size.

Opening the box reveals the contents, starting with the product documentation:

Taking the items out, we have the heat sink covered, along with a Thermaltake 120mm fan:

We also have a box that has the accessories, in which the brackets, screws, and a thermal paste is included:

First, I need to take out the AMD heat sink bracket from the motherboard:

And then install the Thermaltake TOUGHAIR 310 bracket:

We now will secure it with another bracket:

Next, we will mount the fan brackets in the fan:

Finally, we will place the fan in the heat sink:

As we can see, this heat sink is big! You need to see if your case can hold heat sink of this size. You may need one that uses a 92mm fan or a slim model if a 120mm would not fit in it.

Here we can see the fan running in my PC:

Sure, it doesn’t have any LED lights, but who needs flashy LED lights when I’m being productive in my PC?

I’ve stress tested the CPU and it seems I can still get the usual 3.9Ghz to 4.1Ghz, depending on the work being done, and temps of about 83 to 85C. The AMD Ryzen 3950X gets really hot, but I decided to go with an Air Cooler because I’m afraid of using a water cooler that may fail and damage the system.

The fan is definitely quieter even when set to run at Full Load. For me, the noisiest fans seem to be the top fans in the case (not shown in the image because this is a topic for another day).

This seems to be a good heat sink to keep my CPU under control and it is quieter than the 92mm AMD cooler that came back with my Ryzen 2700x CPU that I was using before upgrading to the 3950x (I was also getting 3.9Ghz to 4.1Ghz with it too). It is also cheap, at around just $35. In case the heat sink fan fail, we can easily replace it. Because of this design, it also means cleaning this heat sink will be much better than it was with the AMD Wraith Prism.

You can order this Heat Sink on Amazon on the following link: