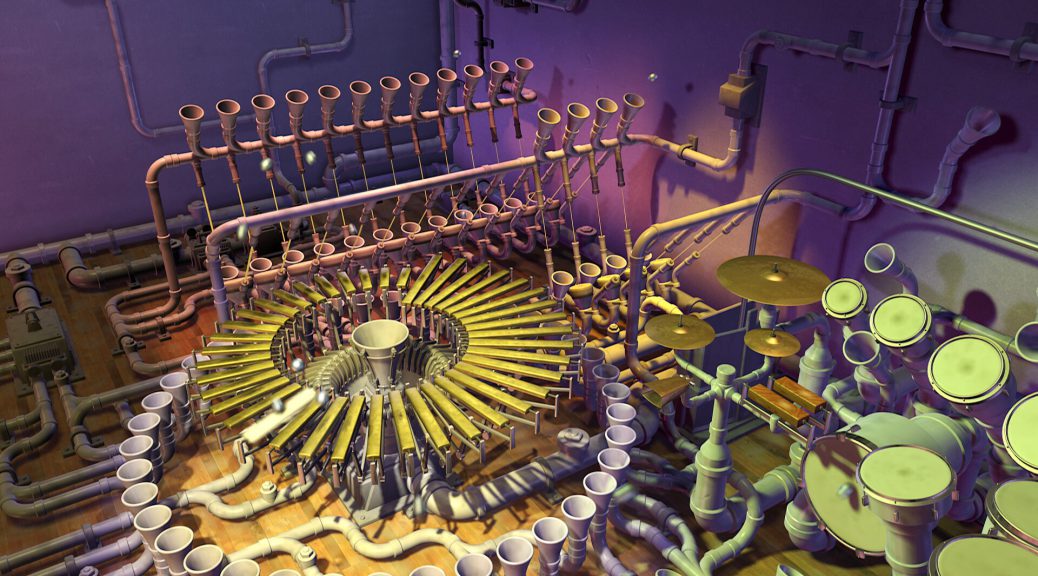 In the 2000s, we had a spectacular collection of Computer-Generated 3D Animated Music. As you may have guessed, Animusic means Animated Music, and was originally created by Wayne Lytle. Animusic released 2 DVDs and a Blu-Ray Remaster of the 2nd disc.

The first Animusic disc contained spectacular instruments including lasers that produced sounds and balls that came out of pipes (Pipe Dream).

The second Animusic disc continued with this type of animations, having focused on robots, a sequel to the popular Pipe Dream animation, lasers and fiber optics.

Years went by and Animusic was a spectacular hit. It was presented on some television channels and eventually, a 3rd Animusic was planned. A successful Kickstarter campaign was created in 2012 to make it come true, but we still haven’t gotten it, neither we know when it will come out (if it ever does). On the Animusic subreddit, some say that the project is still being worked on. Meanwhile, others have chosen to fill the gap by making custom animations that resembles or are inspired by the original Animusic musical numbers.

Here are 2 of my favorite custom Animusic animations. These are all entirely new, being inspired and taking references on Animusic elements.

Ball machine was created by Derek Hugger. Inspired by Animusic, we can see a similarity with Pipe Dream due to its use of balls. I personally find this to be the best original animation created. The music is well done, not complicated, and perfectly orchestrated with the instruments. It even has solo versions that focuses on its instruments, just like the original Animusic had parts that focused on its instruments. while the animation has a dark environment, it is still easy to see as the balls goes thought sections that triggers lights. Finally, at 4 minutes, the length is similar to a typical Animusic animation.

This animation got uploaded a few weeks ago. Made by Lasers, Lights, and Music, this team is attempting to recreate the original Animusic animations as a tribute for the 20th anniversary. In this animation, we can see a lot of references to the original animations. We see 2 harp-like instrument that references Acoustic Curves and Aqua Harp. The environment is made to reference Harmonic Voltage as well as the drum set, although it can also reference the drum set of Stick Figures. The blue laser can be a reference to Future Retro. Finally, the fiber bundles are a reference to Fiber Bundles (From Animusic 2).

In this category, we will see animations that resembles the original ones, but are custom made. Technically, the music is the main difference, while the animation and objects are similar or an imitation of the originals. Even the camera movements resemble that of the original ones. Therefore, I decided to call this section Fan-Made “Sequels”.

This Pipe Dream Redux animation has a well-orchestrated audio track. Its camera movement focuses on each instrument as the balls hits them. The lighting is spectacular. It is known that Pipe Dream is, without doubt, the best Animusic animation ever created that inspires new musical versions of it. This animation was recently uploaded on September of this year, made by iMac.

Loved Pipe Dream, its sequel and the Redux animation? Then you’ll love this “sequel” made by VirtualTurtle. The animation and lighting clearly resemble that of Animusic 2. The music is awesome too! It’s worth watching for sure and to add to your favorite video list.

Another animation by VirtualTurtle, this is an original musical number using the Fiber Bundles animation environment. The original was another of my favorites in the 2nd Animusic disc, and this is a great tribute to it.

Lasers, Lights, and Music has teased us with a teaser trailer of an upcoming fan-made Animusic 1 remake.

While no date has been announced besides a 2022 release, I’m looking forward to watching this remake. I can’t imagine how good this will look given the quality of Ambient Glow.

Will we ever get Animusic 3?

We don’t know for sure. Some say we will get it at some point. The good thing is that there is a community alive that looks forward to hopefully seeing Animusic 3, while creating custom animations based or inspired on the originals. The official website got updated some time ago, featuring some still images which also gives us hope.

You can join the Animusic community on Reddit and Discord at the following link to be updated and interact with other Animusic fans:

Have you ever heard of Animusic before? What is your favorite animation? Are you looking forward to watching more animations?