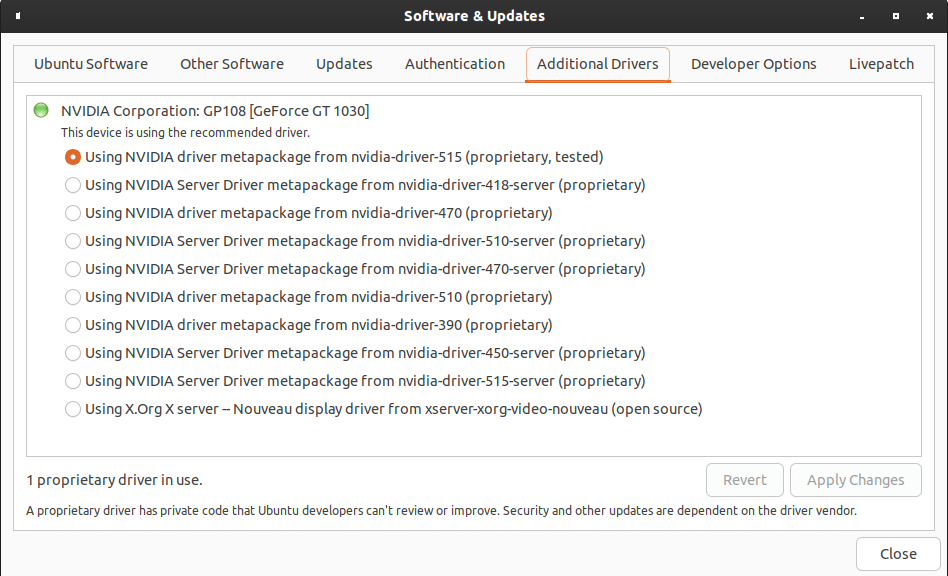 Today, we will be installing the Nvidia GPU drivers for an Nvidia GeForce 10-series using a command called ubuntu-drivers which is available in Ubuntu. While I’m using the GeForce 10-series as an example, this should work for other GPU generations and architectures as well.

When I upgraded Ubuntu 22.04 to the development release of 22.10, everything went fine. However, I was using the integrated graphics card in my Media Center PC as my main output device. The reason for this was that in Windows, I was having a weird issue with the Nvidia GPU stuttering every second, and this was very noticeable when playing back movies in it. My solution to this was to use the integrated Intel GPU just for output and using the Nvidia Geforce 1030 GPU just for decoding. This worked well, but let me wondering if I had this same problem in Linux.

I went ahead and connected my TV HDMI cable to the Geforce 1030 after disabling the iGPU (Integrated GPU) in the PC UEFI BIOS and setting the PCI Express card as the primary (and the only one, of course). I then booted to Ubuntu, but I noticed my screen resolution was very low. Once I logged in, I was found with this message:

When I went to the display options to see if I could put it in 1080p resolution, I couldn’t, being locked to the 800×600 VGA resolution.

This seems like if the driver was not installed. After all, it should be saying it is using the HDMI output and not the “Laptop” display. This machine does have a header for connecting an LVDS display, which maybe caused it to think it is a laptop instead of a desktop. Still, that’s unlikely since that LVDS header should be using the integrated GPU I just disabled.

Luckily, the solution to solve this issue is to run the ubuntu-drivers utility to let it detect the hardware and install the drivers. It was as easy as typing this in a terminal window:

This detected and began downloading the driver from Nvidia:

Once this was done, the display setting page showed the output correctly as HDMI:

We can also now see in the Additional Drivers window that it is now using the Nvidia driver:

This driver has been working great ever since it was installed and I haven´t noticed any problems at all. I can say it works better than when I was using Windows!