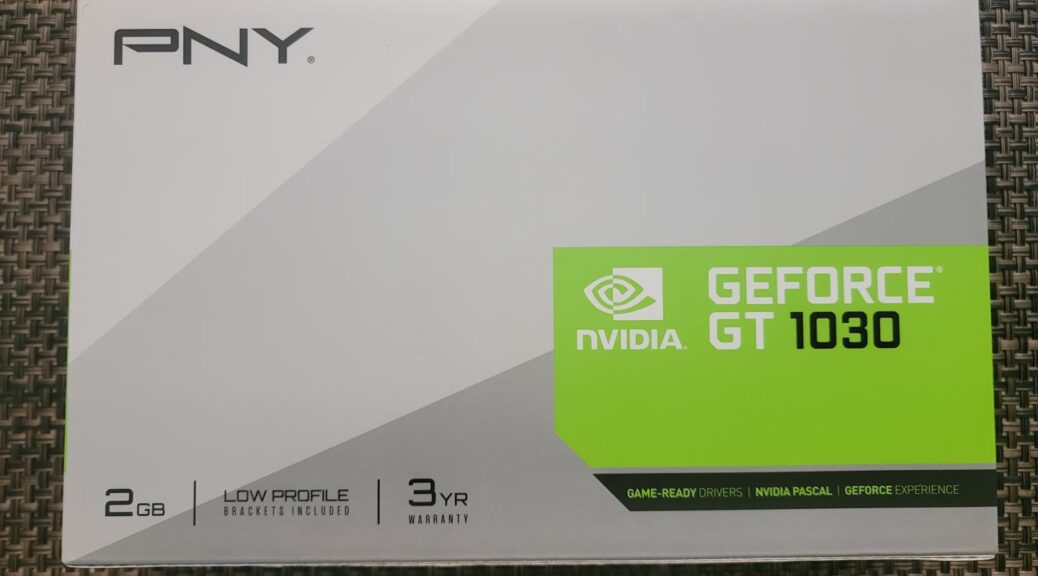 Today, we will be seeing the PNY Nvidia GeForce GT 1030 2GB PCI Express Graphics Processing Unit (GPU). This weekend, I didn’t write a post since I spent it diagnosing an issue with my Gigabyte GeForce GT 1030 D4 2G, where it seems it “died”, at least partially, on Windows.

After diagnosing the issue and trying it on another PC, I realized that the card may have an internal malfunction preventing the Nvidia Windows drivers from working with it. It is strange, the card boots and shows the splash screen and works with the Microsoft Basic Display Driver. It also seems to work fine with Linux, but on Windows, as soon as the Nvidia driver gets installed, it crashes and stops working.

After determining that the Gigabyte card may in fact be defective, I went to my local Best Buy store which had the PNY GeForce GT 1030 2G card in stock for about $109.99. This is normally the price for the GT 1030 DDR4 low profile video card series. There are also GDDR5 variants, but these may cost a little more.

The reason I chose the DDR4 version is simply because this card is being used in my Living Room Media Center PC, and is just used to decode videos, mostly from DVDs and Blu-Rays I rent to watch. The GT 1030 cards are low powered, doesn’t require external power, and simply does the job.

My first impressions upon picking up this GPU was that the box looked smaller. In fact, it is smaller than the box where the Gigabyte card came:

However, what I didn’t like was that the contents seem to not be securely fitted inside. Opening the box proved this:

We see that the GPU is inside an anti-static bag but is loose inside the box. Other than the GPU, we have a low-profile bracket included as well as a generic manual that seem to cover all PNY Nvidia GPUs installation:

Opening the GPU bag reveals how small the card is:

Comparing it with the Gigabyte GT 1030 card, we see that the PNY card is a bit smaller and has a PCI Express x8 interface while the Gigabyte card is made to fit into x16 slots. In both of these cases, the card will operate on up to PCI Express 3.0 x4 because that’s what the GP108 chip supports. We can also see that I changed the card bracket to the Low-Profile version:

The card fits perfectly in my Mini-ITX PC:

I’ll keep monitoring this setup. It was strange that the Gigabyte card malfunctioned, as it was working fine.

The fact that it seems to work in Linux may indicate that the Nvidia Windows driver may be attempting to initiate something in the card that may be failing while Linux somehow manages to use the card as is. Due to this issue, I’ll be RMA-ing the Gigabyte card, which is still in its warranty period (Just next month it would be a full year of owning this card!).

While I’ll be using the PNY card now, it is always a good idea to have a spare GPU around for diagnostic purposes.

You can get this card on Amazon at the following links: