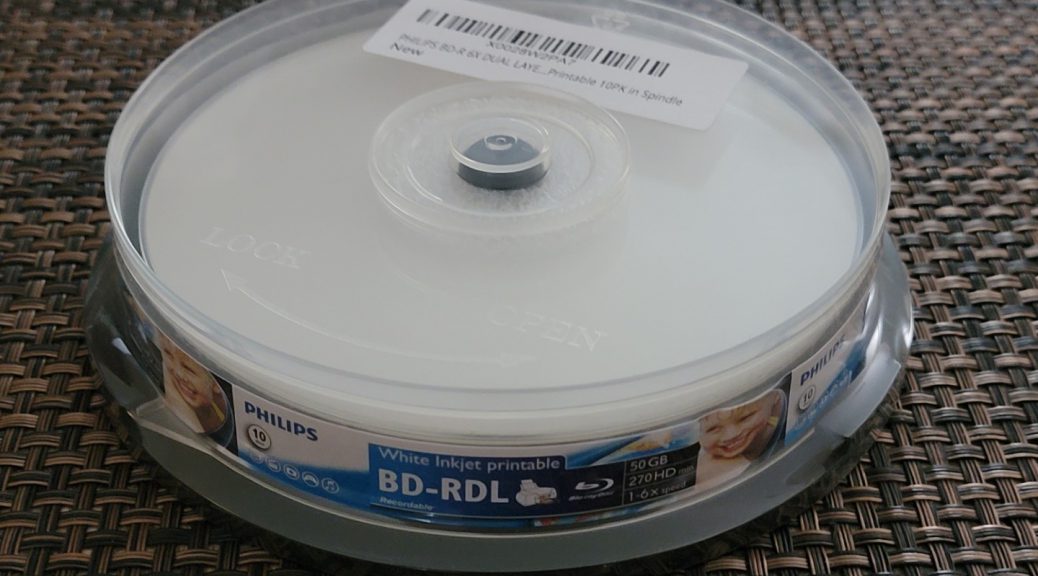 Today, we will be looking at the Philips BD-R DL White Inkjet Printable Blu-Ray Recordable media:

These discs were at a surprising price of just $9 dollars on Amazon, so I picked up 5 spindles of these.

These discs holds up to 50GB and are rated to be burnt at up to 6x. Let’s take a look at the disc surface and label sides:

The discs have the Philips brand at the center of the disc. Also, we can see that the discs have some sort of tint on the data side. Hopefully, these will not affect the recordings. Or will it? Let’s find out how my burners handle these discs.

My first attempt to burn these was with my old but trusted Panasonic UJ-260 drive. It has been successfully burning discs with media codes RITEK-BR2 (25GB), RITEK-DR3 (50GB), CMCMAG-BA5 (25GB) and VERBAT-IMk (100GB).

The disc was recognized as CMCMAG-DI6-000 and can be burnt at up to 4x in this drive:

We can see that there are burning issues. The Panasonic UJ-260 writes double layer media in two zones. It starts at 2x, and then burns at 4x. On the 2nd layer, it goes from 4x to 2x. The red zones are when the drive spins down to 2x to burn the final parts of the disc.

Still, out of curiosity, somehow this disc was readable on the LG drive when I did a ScanDisc run on Nero DiscSpeed:

I burned another disc, this time at 2x. The burn again went fine, but the verification failed on the 2nd layer again.

The disc looks awful. You can see the rings in the recording surface. The scans also points this issue out:

Both drives agree that something is wrong at the end. The disc should technically be looking darker like the rings look, which would explain why the second layer was scanning properly until the rings started to appear.

Few days later, I burned another one at 4x using ImgBurn. The previous 2 were burned with Nero, but that shouldn’t had be an issue. This time, the disc burned and verified fine, but it still did rings at the disc surface:

Scans looks better, but I wouldn’t trust the disc in its condition:

It’s still clear that the rings are affecting the burn.

Burning on the LiteOn iHBS112

I burned another disc on the LiteOn iHBS112. This drive is able to burn them at 4x and 6x:

The disc burned and verified fine, but the drive produced rings on the disc surface too.

This burner also burned this disc in 2 zones, one at 4x and the other at 6x. The first layer burned fine, but we can see it struggled on the 2nd layer at the 4x zone:

Regardless of the scans, the disc was completely readable.

This drive is interesting in that if I burn with Nero, it fails immediately with “Write Error” and closes the disc, effectively not allowing us to retry burning anything since it changes the book type to BD-ROM somehow. I tried with ImgBurn at 6x and it managed to burn and verify the disc, but again, it came out with rings:

The drive did seem to produce a better burn except at the layer break. Also, the several rings do have an effect too:

I burned another disc, but this time it failed verifying:

It seems this time the issue is mostly at the layer break.

I have this slim drive, and surprisingly, it did not produce any visible rings in the disc surface. It is also able to burn it at 6x:

The disc was verified successful too. Let’s see how it performs at the graphs:

The LG seem to tolerate the disc better than the LiteOn. The first layer scanned fine. In both cases, the disc was completely readable without errors.

I recently got this recorder to try burning these discs and see if it would offer a better burning experience. It is able to burn these discs at up to 8x on this drive.

I burned some discs with Nero 2017, which I haven’t upgraded since that version since every version is essentially just the same, and it burned the discs fine at 8x.

The disc surface looks very good. No rings are present either. However, when I first scanned the disc with my LG drive, it gave a really bad result:

So I re-ran the test again and got a way better result:

The LDC numbers may look high but the BIS numbers are almost within the standards. High, but the disc works fine across all my drives. The above scan was also performed at 8x. Below, we have the scans at 4x from my LG and LiteOn drive, from the same disc burned at 8x:

As we can see, the LG drive scanned the disc better than the LiteOn drive, but it was read without any issues there.

This drive seem to have better results when writing the 2nd layer, which is unexpected. Usually, the 1st layer is the one that gets burned the best. I did noticed that this drive seem to do a power calibration when switching layers, which can explain why the LDC/BIS numbers are low at that point. I think of this because the drive seem to slow down and pause when it reaches the layer break. The drive then proceeds to burn the disc as usual. My other drives would just keep burning immediately at this point.

These Philips BD-R DL use discs from CMC Magnetics with media code CMCMAG-DI6-000. These discs seem to have compatibility issues with some drives. In fact, go to Amazon and read the reviews and you’ll see some people are also having issues when burning these discs. Unfortunately, drive vendors that update their firmware are low. LG and Pioneer seem to keep their drives up to date, but the LG doesn’t seem to have the best luck burning them, as some discs may come fine and some may fail. The Pioneer seems to handle them the best and can even overspeed it to 8x. I think the investment on the drive paid off. Considering these discs spindles can be found cheap now, I think I’ll keep purchasing them for my archival needs.

You can buy these discs on Amazon here: