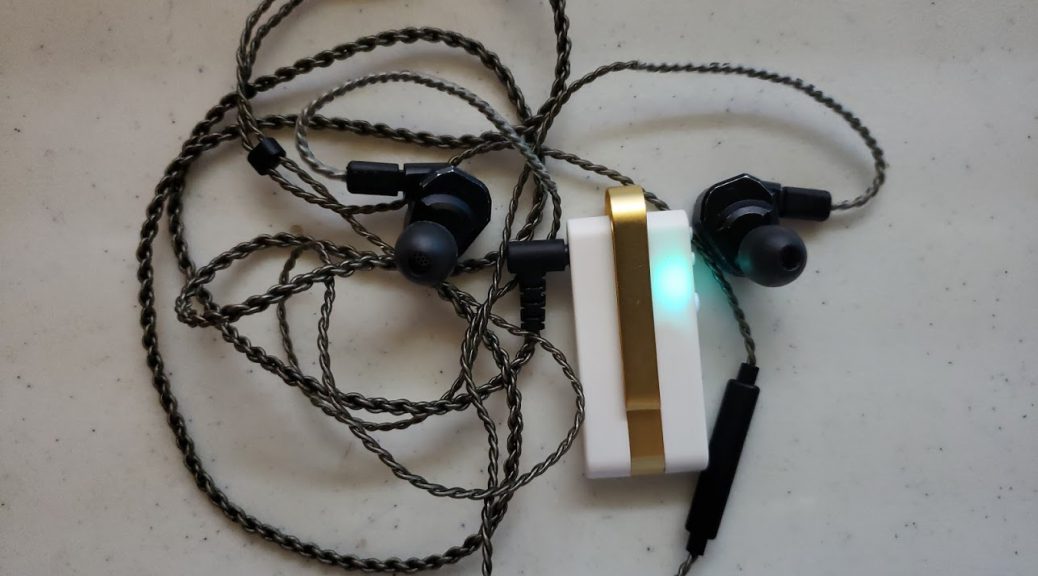 Yesterday, I finally received the Jack by Podo Labs, after 2 years of waiting for this Kickstarter project:

The Jack is a bluetooth receiver that turns standard 3.5mm headphones into bluetooth. The receiver supports Qualcomm’s aptX and uses a CSR8670 chip. It also uses a Maxim MAX97220 amplifier, and it’s stated to handle 2 Vrm up to 600Ohms, according to the project FAQ. The battery size is 300mAh, stated to last up to 12 hours per charge.

The Jack is also one of the few bluetooth adapters that supports headphone inline controls, so you’ll be able to control the volume and play/pause the music using the headphone cable inline remote and also use the Jack’s buttons, whichever method you prefer to use.

Going back to the pictures, the box was a bit crushed when I took it out of the package:

Kickstarter Edition! It includes the Jack (Obviously) and a USB charging cable, which where both protected by this bubble wrap:

Taking them out of the bubble wrap, here’s the Jack and the cable:

I turned it on and connected my headphones, then I paired it with my phone, which was very simple to do:

As soon as I started playing back music, the LED turned from blue to green:

I’m using my KZ ZS7 IEM’s with the Jack:

Unfortunately, the gold clip isn’t in good conditions, but this is purely cosmetic, and of course, does not affect the sound quality:

The Jack also came with a simple rubber case:

And that’s it with the pictures. Now, let’s talk about the sound quality.

The Jack can provide a loud volume, so the amplifier is doing its job. The sound quality is good, thanks to the aptX audio codec. Unfortunately, there’s a noticeable noise that can be heard and can be annoying on quiet tracks. This is pretty common with bluetooth adapters that doesn’t use a dedicated DAC, and is noticeable on sensitive headphones and IEM’s, like the KZ ZS7 that I’m using. Other than that, the sound quality is very good but that noise is annoying. Here’s a place where Podo Labs can improve if they every decide to do another iteration of the Jack.

Music playback showed a flaw, where sometimes the blue LED will not change to green and there will be no audio at all. Sometimes, pausing a music track and resuming it will activate the Jack again and the led will change to Green. Unfortunately, this didn’t worked when I played back music files using my Hidizs AP80 portable audio player, which also supports aptX adapters and headphones.

The best way I’ve found to prevent above’s problem is to use an aptX bluetooth transmitter like the Tunai Wand or the GENKI, where it is continually transmitting the source audio. This way, the Jack is always active and receiving audio and will not have this problem.

In conclusion, I think what stands out the Jack is its ability to handle headphone’s inline control and its battery life. Most other adapters have some 3 to 5 or 6 hours, but I haven’t seen any other reaching 12 hours like the Jack.

The Jack does not have a dedicated audio DAC so the audio quality is comparable to other standard adapters that use a CSR chip, which is acceptable and will satisfy most of the croud, unless you’re using sensitive IEM’s like the KZ ZS7.