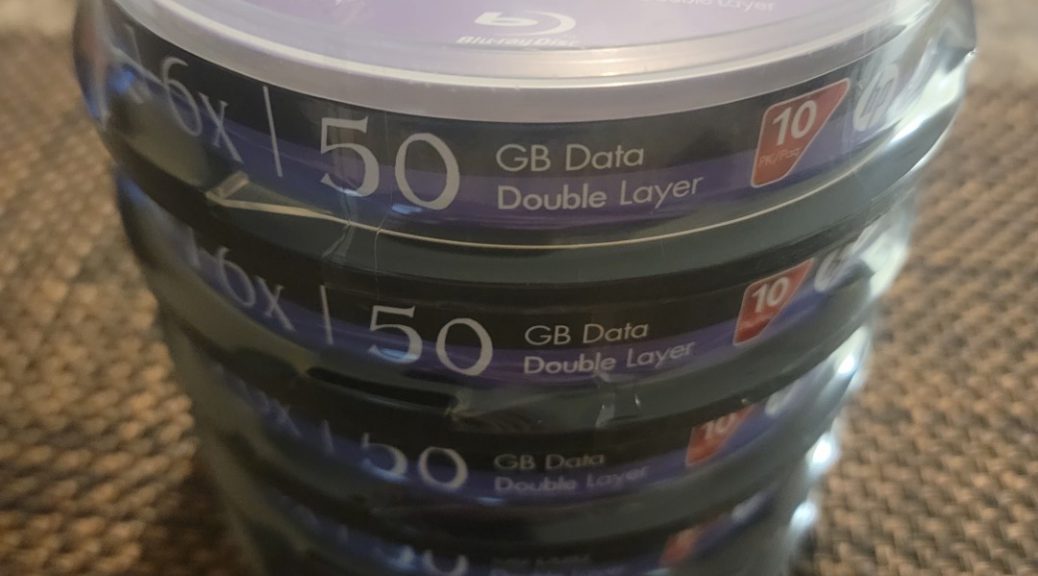 Early this week, I ordered more Double Layer Blu-Ray discs. Unfortunately, the Philips 10pk BD-R DLs that were at $9 each were out of stock, so I had 2 options, both listed at $11 dollars:

I decided to go with the HP ones since I’ve already tested the Philips BD-R DL 10pk printable discs, and maybe the Logo surface ones were the same CMC Magnetics discs. With the HP ones, I have the opportunity to review these and see if they are the same or different than the Philips discs. Because the Verbatim 100GB discs are still very high on price and seem to be low on stock, I need to get more BD-R DLs than usual. This is why I ordered 5 of these packs again.

Basically, last time I wasted a full 10pk of the Philips discs doing tests, until realizing that the Pioneer BDR-2212 drive was the one that handled them best. Will the same happen here again? We’ll find out.

The disc packaging is very similar to the Philips discs, except that these spindles have a paper on the top as well as the branding on the sides. Both were made in Taiwan. They are also rated to be burned up at 6x, although the burning speeds available depends on the burner capabilities and firmware itself.

Opening it, we have the shiny top logo surface discs:

The discs does look to be very well made. The data surface also look very smooth too.

It also has a dark gold-colored look, as opposed to the dark grey color of the Philips discs. This is important because it may tell us that the manufacturer is different.

My first thought was to insert this into the Panasonic UJ-260, to see what it thinks of this disc.

ImgBurn says these discs are made by Verbatim! The media code ID is VERBAT-IMf-000. The Panasonic UJ-260 can burn them at 2x and 6x. This is higher than the RITEK-DR3-000 and CMCMAG-DI6-000 discs, both of which could be burned up to 4x on this drive (Note that the CMCMAG-DI6-000 failed on this drive, but it could burn the RITEK-DR3-000 perfectly fine).

Given this, let’s try to burn a disc with Nero at 6x.

It did seem to start burning great, but unfortunately, the disc failed to burn with just a generic burning error:

This is the first time the Panasonic fails on me while burning a disc. This is also unexpected, given that Verbatim discs should be the best of the best. Usually, this drive would burn a disc fine but may fail on the verification, like it did on the CMCMAG-DI6-000 discs. Maybe it couldn’t handle burning at 6x.

As we can see, it failed at the first layer.

My next try was of course, on the Pioneer BDR-2212. It burned all of the Philips spindles flawlessly, altough on just one of the discs, it wrote a bad sector and this drive was able to read it back while the others failed on that sector. I discarded this disc, but the others wrote and verified just fine.

The Pioneer drive reports that this disc can be burned at up to 8x.

I fired up Nero and attempted to burn the disc at 8x. The CMCMAG-DI6-000 burned great at this speed and the verification went really well too. No speed slowdowns happened at all when reading them.

Nero was able to burn and verify this disc successfully. In fact, it also read back fine in my LiteOn iHBS112.

The finished disc has a dark grey burned color. Here we can see it compared to a burned CMCMAG-DI6-000 disc:

The CMCMAG-DI6-000 on the left has a darker burned color than the VERBAT-IMf-000 disc on the right.

Next are the usual quality scans. I really don’t pay attention to it, as it’s been proven that the drives can handle high amounts of LDC/BIS numbers and the only discs that failed on me were scratched or rotten ones. This happened some years ago, but none of the discs I’ve burned so far has given me issues.

Test results of an 8x burn

The LiteOn iHBS112 seem to read the disc just great but reports high numbers on the first layer and a bit on the 2nd one before going back down to numbers that stays within the limits. Besides this result, the disc was completely readable.

Now, let’s move on to scanning and verifying it on the LG WH16NS58:

The LG drive stayed between the tolerance numbers except once it reached the 20GB mark, where it went up. It stabilized again on the 2nd layer at around 29GB and stayed within its limits. The disc once again was completely readable according to Nero DiscSpeed.

Test results of a 6x burn

I burned a disc at 6x, which was successful too. The difference between a 6x and 8x burn is about 5 minutes.

Now, let’s see how it scanned:

The scan on the LiteOn drive is very similar to the 8x burn. On the LG drive, however, it seems the first layer was burned better. The start of the 2nd layer did present a spike but seem to correct itself. Remember that the Pioneer drive performs some calibration while burning. It usually does it at around 56% after starting to burn the second layer of a BD-R DL disc. The rest of the disc burned with good quality and no spikes.

Even with those spikes on both scans, the disc read fine on both instances.

Burning on the Panasonic UJ260 at 2x

I decided to give this drive another try, but this time burning at 2x. Surprisingly, it handled burning it and succeeded in the verification stage.

Testing on the LiteOn and LG drives looked way, way better too

We can see once again that the LG scanned it a bit better, but the difference between the LiteOn and LG is not so much. Overall, this looks way better than the Pioneer burns at 6x and 8x.

This is very good to know because before the Pioneer drive, I was always burning on the Panasonic drive. This means that the only media this drive cannot handle well is the CMCMAG-DI6-000, but it could be because of the tint of those discs that I mentioned on that review and may not be the case with other branded CMCMAG discs.

The discs from the batch I got are all Verbatim 6x media. They are burning reliably on the Pioneer drive and at 2x on the Panasonic drive. The LG and LiteOn drives can read back the data on all of the above cases regardless of the quality scans without any speed slowdown. I’d recommend this media because of how cheap it is, considering they seem to be Verbatim media but branded for HP.

You can order these discs on Amazon at the following link: