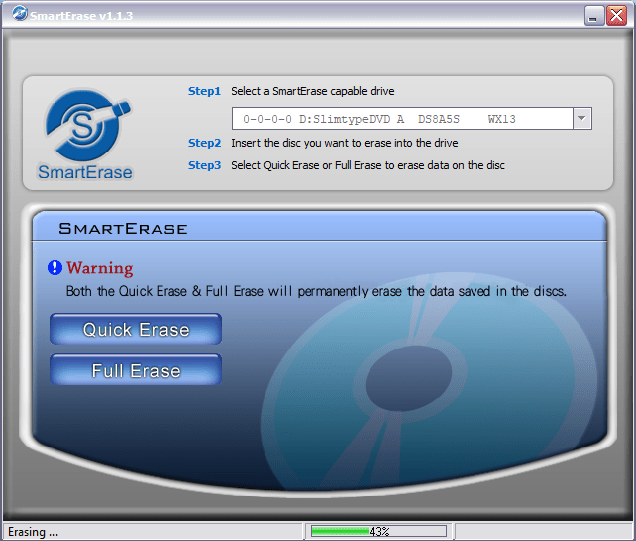 SmartErase is a feature that some LiteOn drives have where it can destroy the data on CD-Rs and DVD+/-R (DL) discs to safely dispose of them. It works by overwriting the entire disc surface. I first came to use this feature on the Lite-On iHAP422 until I got the Lite-On iHAS524 with features SmartErase along with LabelTag (To label the data side of the disc).

I came to the discovery of this feature because I was testing the PlexDisc DVD+R discs in my LG BP50NB40 crossflashed to the LG BP60NB10 firmware. Unfortunately, this drive could reliably burn the disc even when it actually succeeded burning it. So, I inserted a bad burn into the Lite-On DS-8A5S drive and tried to see if the SmartErase application worked. To my surprise, it did!

The old version of the app erases the entire disc surface, even the blank area after the actual burned data. The newer version as well as the integrated SmartErase feature in Lite-On’s SmartPack software will only erase the burned area, leaving the blank area alone. I prefer using the old version because it will completely wipe the disc.

Because the erasing operation performs just like if the disc was being burned, it will take some minutes as the laser goes and overwrites the entire burned data. There’s no speed setting to use here, so the drive will choose the speed to erase the disc on its own. On some discs, it will erase faster than others because of this.

Here is the before and after disc using the SmartErase feature:

Isn’t this a nice feature? I now have 2 drives capable of destroying discs! I also tested the LiteOn DU-8A5LH but it does not support SmartErase: