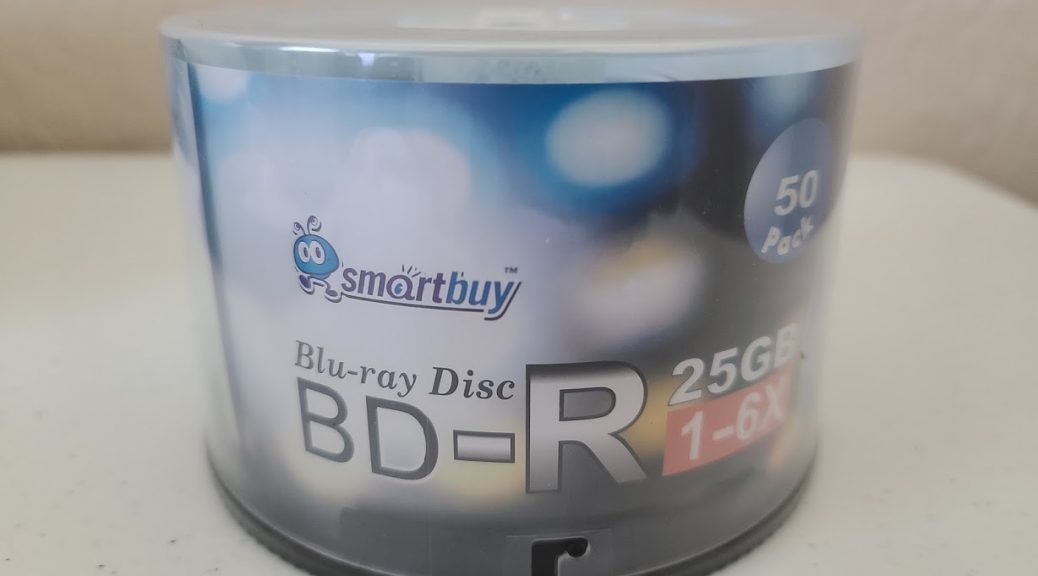 Today, we will be seeing the SmartBuy BD-R 25GB 50Pk Logo Top. These discs should be able to be burned at up to 6x. SmartBuy is a subsidiary of Ritek.

These discs have a blue Logo Top:

On the data side, they have a gold color:

A few years ago, I recall that some gold-colored discs became corrupted due to corrosion. Since these discs are gold-colored too, I’ll be checking them after a while to make sure its data is still fine.

I got these discs last year and I’m writing about them right now, altough these images and screenshots were taken last year, the disc quality scan is from this moment. This is also why the drive we will be using is the LG WH14NS40 crossflashed to the LG WH16NS60 firmware. This drive allows us to burn these discs at up to 8x. I’m no longer using this drive to burn discs due to some coasters it produced randomly and have since moved to using the Panasonic UJ260 or the Pioneer BDR-2212. Here are the details for these discs on the LG drive:

The drive was able to write the disc successfully:

And it was also able to verify correctly:

These discs will not burn correctly on the LiteOn iHBS112. They fail around the 18GB mark, and while the drive can scan the disc, it will also report a very high error count at that same mark. Here is a recent scan from the disc burned in the LG drive:

Here is another scan from another disc also burned in the LG drive and scanned in the LiteOn drive. This is a scan from last year:

The disc, however, is completely readable on that drive. Something that contradicts the scans:

Here is an image of a failed burned disc in the LiteOn drive. Notice the right disc has some clouds in the burned surface and that the left disc surface seem to come lighter in color and then return to be dark:

A year later the discs do not seem to have any visual defects in the surface. The discs can still be read. Here are the scans of 2 discs scanned in the LG WH16NS40 crossflashed to the LG WH16NS58 firmware:

The first image is from the disc we burned above. It still have excellent results. The second image is from a disc also burned last year but with the Panasonic UJ260.

You can see that neither of the images above have the 18GB spike that we had in the LiteOn drive. It seems that the LiteOn really doesn’t like this media. Altough it can be read fine, it will fail to burn, and if it succeed, it will fail to verify those sectors. This read issue does not happen if we read a disc burned with another drive, but the scan will still report the spike at 18GB.

These discs seem to be reliable, except with the LiteOn drive. I was able to burn them fine with my Panasonic UJ260, where it can only burn them at 2x or 4x, but will always burn them at 2x regardless. I assume it has to do with the drive’s power calibration it performs before it writes.

The LG WH16NS40, crossflashed to the LG WH16NS60 firmware at that moment can also burn the discs fine. I do recall it failed to close the disc session sometimes, erroring out and therefore leaving the disc in an open state. The discs would still work and the data could be read just fine, with the exception that they remained open.

You can buy these discs on Amazon at the following link: